First up – a response to some of the questions from my commenters.

Inquisitive WFTs the handsome Floridians J&JH want to know how I am doing, as did the gorgeous husky Op Pack, and M&B sent their good wishes for my health too.

So, the tablets have finished which is a shame in a way as I was getting extra tasties before my breakfast to – supposedly – disguise the tabs. But Misery had the bright idea of adding slices to my food anyway even when the tabs were finished. Kind Misery.

But for some reason I seemed to develop a nasty sore at the top of one of my back legs and tried to yank out my fur around it. Master and Misery put some anti-septic spray on it and yes – promptly drove me back to nice Pedro.

He cut off my fur, sprayed the icky bit, and then rubbed some cream on. He gave Misery the spray, and sent her off to the pharmacist with a prescription for a small tube of ointment. It is drying up now I think, but I have included some pix of it looking nasty. And of me looking nice of course. 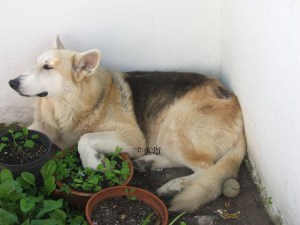 Pedro said I was looking better and had put on some weight, so he seemed pleased with my progress. I will have a blood test in a few months time and see if those nasty e-things are gone.

Quick reply to JB – seems HULA operatives can be any breed. Or, gasp!!! even – CATZ!! So go for it. But you have to provide evidence that you fulfil the criteria. I bet you don’t. I ask you, CATZ get everywhere!

Now Randi asked if I got her holiday card. Well, I hadn’t when she asked but it arrived only the next day. What a coincidence. And in the same week, I had received a card from JB and her feline family, and the last one to arrive the other day was a wonderful one of Santa Umbrella in Florida from Jake and Just Harry. That was two cards in one as it had a pic of them inside it too.

Now, I have a theory. I think that cards posted to me from America go to Gibraltar in America. Gibraltar is in Michigan on the Detroit river, I didn’t know any of that. But I think my cards go there first and then when there is no Pippadog in Gibraltar MI, they get sent on to me in Gibraltar, Gibraltar. If any of my pals want to send me cards again, perhaps they should add two Gibraltars to my address.

Misery did not print any cards this year so I did not send any. But I would like to thank the friends I have mentioned above for thinking of me and remembering me, (Misery and Master too) and those friends who sent cards that arrived earlier.

Off we went in my Landy to my Spanish finca. As we approached the frontera (frontier), Misery turned round to ask me: ‘Do you think your nice Guardia Civil friends will want to say hello?’

‘Of course,’ I answered. ‘They always do.’ This has nothing to do with the fact that there are no windows for them to see what we have in the back of the Landy, it is because they want to say hello to me, Pippa.

But as we were going through the frontier, no-one seemed interested in us. They were looking at a Spanish car, and two vans. Then! Just as we were about to go through without greetings, a Guardia Civil officer said ‘Hola!’

Master promptly stopped. He jumped out of our Landy (his seatbelt was undone waiting for the call to say hello to me) and walked around to the rear. I was very excited and jumped towards the rear door.

‘Eeeeek!!!!’ said the officer, or something similar in Spanish.

She jumped back ten yards. Why didn’t she want to say Hola! to me and stroke me?

Then she told master to close the door and to go. She didn’t seem to want to look for tobacco or alcohol or whatever they seem to want to find that we never have anyway.

Poor sad Pippa. Most of them say Hola! and give me a pat. It’s not as though I am a frightening sort of a dog. Even if one did once call me a leon, or a tigre or something like that.

“Hello friends, where are you?”

Now I have some other wonderful news. My secret operations as an undercover HULA operative can finally be disclosed as I am retired.

I am so proud to have my certificate. Of course Misery didn’t complete my application correctly so I thought I should add a few comments. Well, maybe not today. Another day …

Master thinks I am stupid. Every morning he feeds me my tablets disguised in something tasty in a bid to get me to eat them. He thinks I haven’t noticed. 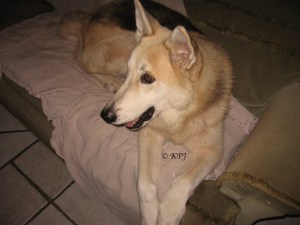 One morning I chucked one out on the floor and thought I had got away with not eating it, but he spotted it and gave me it again. He even kept my mouth closed and stroked my throat to make sure I swallowed it. What I have to put up with!

Here is a list of tasties that I have been fed before my main breakfast as supposed tablet hiders:

I nearly got pineapple but Greedy Mistress was too busy getting it down her neck for it to become a tablet disguiser. Just as well she gave me a few pieces anyway.

But my very favourite is beef slices. Actually they are not beef at all, they are some veggie slices that Master and Misery eat, called beef style slices.

Master cuts one slice into three and wraps a tablet inside each one. I tell you I would eat twenty tablets every morning to get more of this yummy stuff. It does not touch the sides I gobble it down so fast. 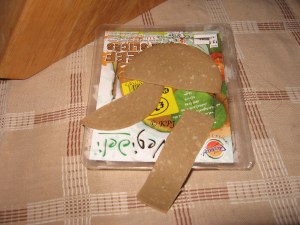 Thank you to all my FB pals who wished me a happy barkday. Trouble is Misery has forgotten when it was, just that it was Jan 2004 when I found them, so she picked an arbitrary date. I have made her look it up on my blog from years back. It is the 14 January. I wonder if I will get to celebrate two got-them-days this year?

Now, I have a very bad piece of news to impart. My sofa has been – INVADED!! Master and Misery claim they have been poorly. Have they got tick disease and are they taking millions of tablets? No, therefore they are not remotely poorly IMDO.

But nevertheless, first Misery invaded it for a little nap claiming she was tired and poorly – and then look at this. Master was on there all afternoon. I kept walking up to him glaring – waiting for him to jump off – but he just kept snoring away. 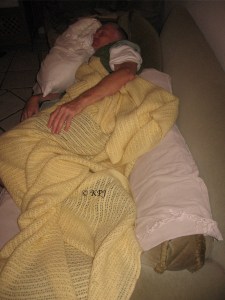 A dog’s sofa is his very own personal space, only to be occasionally and very generously shared if someone is sitting next to him with food. Otherwise – paws off.

Now normally, like most pups, I keep my tail tidily curled round myself when I am asleep. But after the recent surprise invasion – I have decided to stretch right out, and that includes my tail taking up the final third of the sofa. Perhaps they will get the message.

Mine, I tell you, all mine

Happy New Year everypup. I hope you all had lovely holidays or howlidays if that is how you bark. Not that I ever bark, apart from when it is breakfast time, but it is always more of a Ha-Roooooo than anything else. Today it was a Haroo followed by a RUFF!

Now I like to do a review of the past year. Misery does one on her blog so I should get to do one as well I think. But as I’ve not posted much this year there is nothing to review. Sad Pippadog.

Instead I shall tell you about my poorlinesses. I didn’t tell you when I was very poorly, but I am feeling better enough now to say a little bit. But not much, Misery can write vast boring reams about it on her blog for anyone interested in techy detail. Or in this case, ticky detail. Haha!! I hope Ammy likes my joke.

Last month I was feeling a bit listless, but one day, I really couldn’t be bothered to go anywhere. I didn’t even want to go down the stairs to go out in the mornings. Not even to chase cats.

Poorly me on my sofa

Master and Misery were so concerned that she even got out of bed early, and they bundled me into my Land Rover before 8am and we shot off to see my nice vet, Pedro. I had only seen him the previous week for my jabs and I seemed ok then.

Pedro gently felt me, and said I had some pain. Clever Pedro. While I was lying on the floor with my head flopped in Master’s hands, Pedro and his assistant took some blood from my front paw (just like Skye had at her vet’s), and then they cut some of my toenails.

We had to go back in a couple of days time for the results of the blood test but in the meantime, Pedro gave Misery some painkillers for me. Previcox. I can recommend those to everypup. They are chewy and taste of caramel and smoke.

When we went back to see Pedro I was already feeling a bit better, but he gave me some more painkillers, and some new tablets. I wasn’t very keen on those, they don’t taste nice. They were called doxycyclin. He hadn’t got all the test results through but he told Misery I needed one of each every day. A couple of days later he emailed us and said that the test for erlichia canis was positive. I had very high readings of this and Misery had to double the dose of the little yellow doxycyclin tablets for me.

I have erlichiosis. It is a nasty tick disease. I will say no more except that I am still eating those nasty tablets for the next few weeks to try and get rid of the horrid organism and its effects. I will let you know when Misery writes about it, and you can read all the ticky detail then.

Not having my photo taken. Don’t like nasty tablets 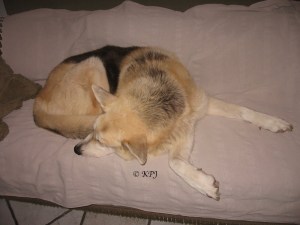 Here is something more interesting. We all went geocatzing to Comares before I was poorly. Master and I decided to admire the view while Mistress was sent off to hunt for the geocache. Master thought there might be catz near the castle so that’s why we didn’t go. I must say that puzzled me, I thought the whole point of these expeditions was to find catz. Geocatz or otherwise. 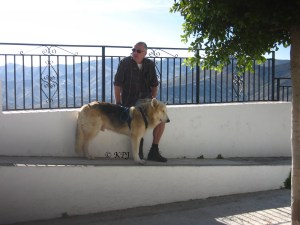 Yes! I found one. I would have had him too but Master didn’t want to go diving under the car with me. So we set off back for my Landy to avoid anymore catz. But on the way down, I found another one and nearly had him too. Mistress didn’t find her cache. I found two catz but didn’t get them. I think my expedition was the most successful though.

[They went back on New Year’s Day without me and found the real cache. Master did anyway, Misery was her usual useless self. She reported back that there were no catz around – huh, a likely tale]

Back in Gib again and feeling better after my tabs.

One of my nice Christmas cards with doggies on

Looking for my friends – the monkeys