Hello everypup and their peeps

Well, I’ve just managed to squeeze in a July post. Well done to Momo and Pinot for not expecting another one until this month! You were right.

Well first I am allowed to be serious, as Misery is too busy writing her own stuff to write serious stuff about me.

Remember my tick disease some six or seven months ago? If not checky out Misery’s link to the top of the sidebar.

My nice vet Pedro said to check back with him in six months time about a blood test to see if the nasty illness had gone away.

Master and Misery called to see him – WITHOUT ME – to ask about when to go, and he said, oh, when you are passing with Pippa. Which is sometime never in summer as it is too hot for them to take me shopping or geocatzing or stuffs like that and leaving me alone in the vehicle for even two seconds.

So last week we made a special effort to go and see him. I was very excited because I like Pedro. He has a very gentle manner and is softly spoken and is nice to pups and peeps alike.

We arrived for opening time at 10 am and there was a huge queue. In winter we turn up mid-morning because it is cooler and it is usually quieter. And this was Monday too, so bound to be busier.

Master and I sat away from the other dogs because I would have wanted to go and say hello to them all, and they might have been frightened because they were little. Misery had joined the queue and was listening to them talking about me in Spanish and calling me wolf-dog.

When it was our turn, the surgery was almost empty. Pedro checked me over and said I looked much better and my eyes were bright.

But I have some nasty sores again and Master has been spraying them with Ado Eqmina. This is an antiseptic for ulcers and wounds in general, and the active ingredient is chlorhexidine gluconate. It is also used to kill bacteria such as Streptococcus and E-coli. And other Grams, whatever a Gram may be. It’s not absorbed into the system so it can be used as many times as required. No prescription needed.

There are no contraindications listed, and side effects are rare, occasionally photosensitive reactions may occur and prolonged use may cause dermatitis.

Pedro opened a new container of Eqmina and instead of using the spray he chucked it on liberally and told Master to apply it three times a day and rub it well in. Now, how did he know that was not a job for Wimpy Misery?

Next, Master told him that when I am excited (eg meal times) I drip peepee. I am blushing here because now my girlfriends will not love me 😦 He didn’t need to say much more because there was a tiny pool where I was standing.

For this I got some tablets – cefalexina (cefalexin/cephalexin) which is an antibiotic. Cefalexin is the generic name, but there are a lot of branded versions too. It seems to be used to treat a number of infections including urinary tract infection. It does have potential side effects though – there is a huge list here on wiki – so you need a prescription for this one.

We got two tablets a day for five days. They don’t taste nice but at least it meant I got lots and lots of treats to disguise it.

Total cost – 30€, including 11€ for Eqmina, and the rest for the tablets, and his consultation time. There was no blood test for canine erlichiosis as Pedro was happy with my progress.

I bet you did not know I was such a pharmaceutically orientated pup.

I haven’t posted a pic of my sore but if you want to check out what I am talking about there is one here from back in January.

Now onto even more serious stuff. Master and Misery have not been eating bread for weeks and weeks. So I have had NO TOAST.

But today however, Master decided to have toast with his breakfast. So here are some toasty pix.

Hoping for toast. Wait!! Oh no!! Misery has forgotten to wipe my eye before she took my pic!! 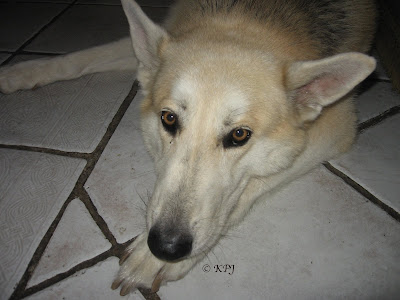 Looking soulful – and she still hasn’t wiped my eye. Not good enough. Pups – always make sure your peeps wipe your eyes for camera shots.

Things are looking up. Master has his toast and I have my eye wiped at last.

Crunching toast with eyes shut to savour the deliciousness.

I am patience itself waiting for the next bit.

Such a happy smiling Pippadog.

Taking my toasty nicely and gently.

Bliss. Waiting for even more toast. I could do this all day.

Finally, Misery was meant to post some arty pix of the views of Gib from my favourite peepee spot on the way home that I wrote about last month and she never did. I might as well have posted them in the first place. So I am posting them now instead and we stopped there yesterday too so it is vaguely relevant. It looks rather like a watercolour don’t you think?

Gib rising out of the haze in the distance and the long winding road down El Higueron.

A closer shot of The Rock with all the development around the lower levels.