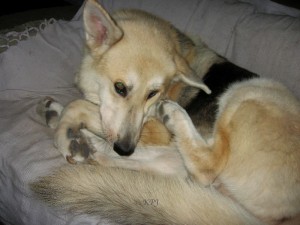 When mistress goes shopping to the Moroccan man up the back from my kennelflat she never takes me.

I think that is a shame as I would like to go shopping, she brings back tasty olives and Moroccan bread and all sorts of other yummies.

And when she walks up Town Range to the shop, she often sees this doggy in the window. I think we could be friends. 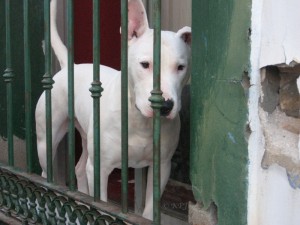 Mistress usually says “Hola perro'” or “Hola chico”. Sometimes she adds “Eres muy guapo”. He is a Gibraltarian dog so mistress speaks to him in llanito/español. He has barked back at her a few times, but she isn’t sure whether he is really barking at her because he recognises her now, or whether he is barking at other people walking past.

I think she should take me so I could go and bark at him, or rub pink noses or something. I am sure there would be nice cats up the back street too. 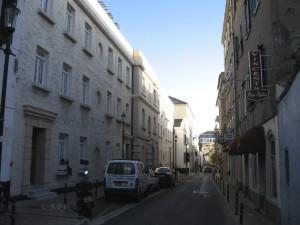 Thank you very much to every dog who voted in my poll “Does Lava look like me?”

Nearly half of you said “sort of” with ten votes. Then six said “I have a longer pointy nose (and it’s pink)”, hmmmmm. And four said yes, and two said no. I think I will go with the ones who said “sort of” as it is a nice sitting-on-the-fence result.

Perhaps I should choose a girlfriend for each post. At the bottom of every post I could write which special girlfriend I am dreaming about. And that means I could talk about at least one girlfriend each post. Or would the others get jealous? What do you think? That can be my new poll. Fix my poll mistress.

Edited to add: mistress is improving – she has made it a multiple choice poll, so you also get the chance to say I have too many girlfriends. Actually that is not such a good idea. Why did mistress add that? Please don’t tick that box.